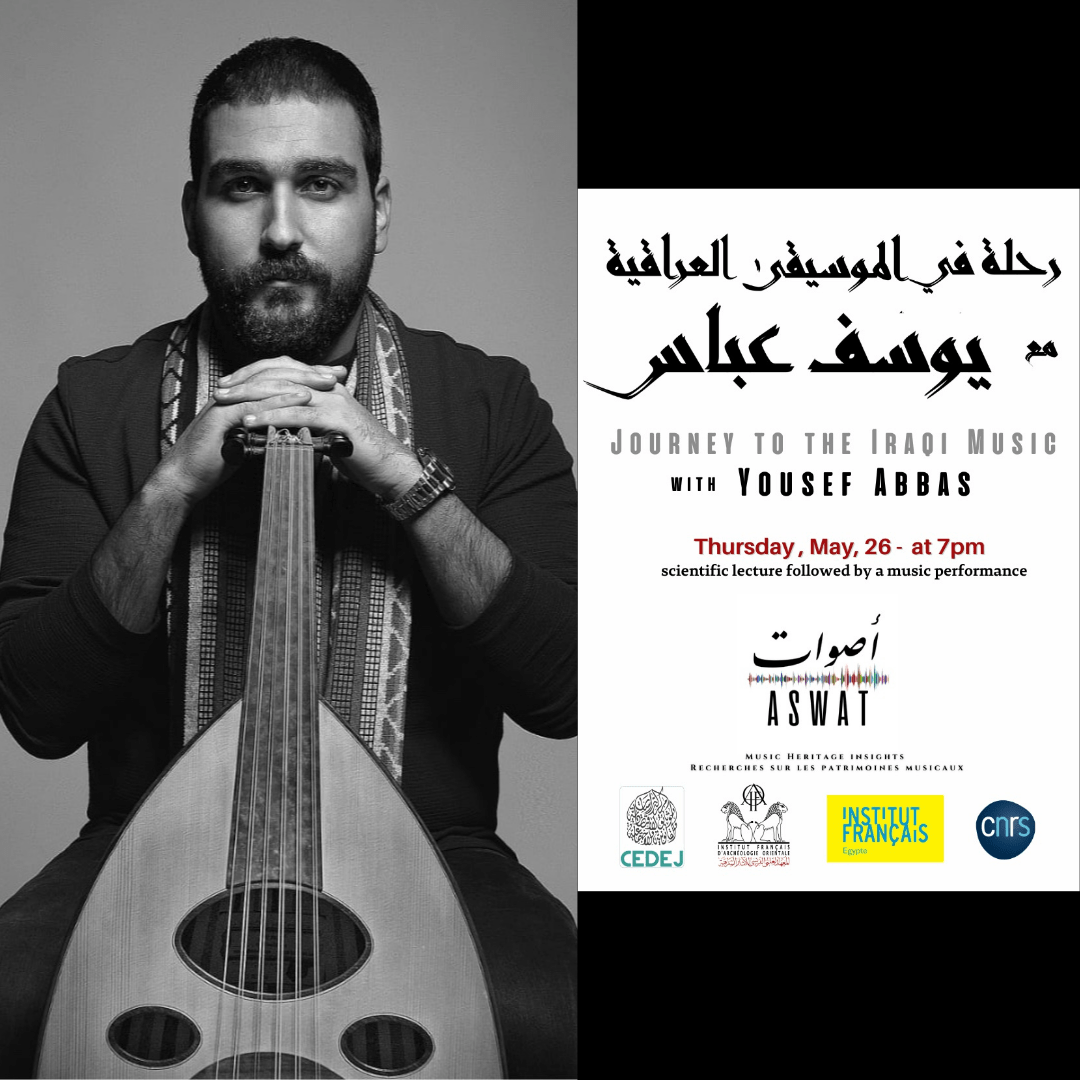 | 🎼 ASWAT |
Sounds – and music – are able to shape individual and collective
identities, define spaces and borders, denote cultures, transmit knowledge
and influence style lives. ASWAT is a series of music meetings and performances focusing on Egyptian culture(s) of music that seeks to explore
a range of musical practices across Egypt, and beyond, through the contribution of academic speakers and music makers, followed by a concert.
The meetings will offer the opportunity to deepen some historical, religious, social and musicological aspects that interwoven in, and from, the Egyptian music heritage, addressing creation, performance and reception practice.
ASWAT is a joint initiative from IFAO, CEDEJ and the French Institute in Egypt, curated by Kawkab Tawfik

Description:
Yousef Abbas with his ensemble will accompany us to a journey in the Iraqi music, from the traditional heritage to his original composition, based mainly on his new interpretation of the Iraqi Maqam, a genre of Arabic maqam music found in Iraq since the Abbasid time. The munšid (religious singer) Nasir Sharaf will sing texts derived from classical Arabic, such as al-Ḥallaǧ, al-Mutanabbī and Ibn ‘Arabī. The ensemble instruments: riq, contrabass, oud, piano, khana.
About the artist:
Born in Babilon in 1994, Yousef Abbas was an enfant prodige who graduated in Bayt al- ‘Ūd al-‘Arabī (Arabic Oud House) in Cairo in a very young age under the supervision of the maestro Naseer Shamma. During his career, he led the Arabic Oud Orchestra and received several prizes, among them the Carthage Music prize and the Munir Bashir Medal as the best and youngest musician and professor of music in the Arab world. Beside his own ensemble, he composed several music pieces for oud orchestras and soundtracks for movies and TV series. Today, is among the most prominent oud musicians and composers in the Middle East and represents Iraq in festivals and forums.